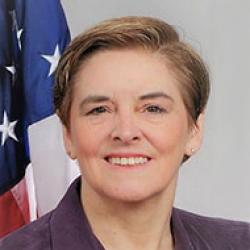 Anne Driscoll is the Principal Deputy Assistant for Industry and Analysis. In this position, she oversees a broad portfolio of programs aimed at increasing the global competitiveness of U.S. manufacturers and service providers. She manages more than 200 professionals who provide unique sectoral and analytical expertise that underpins U.S. government objectives on competitiveness, trade policy, and trade promotion.

Driscoll joined the U.S. Department of Commerce in 1988, where she has held a number of roles, including positions focused on improving U.S. trade relations with Latin America. As the former director of the Latin America and Caribbean branches, she managed a team of country specialists on matters pertaining to trade policy, market access and trade compliance issues, and implementation of regional free trade agreements. She also directed the Commerce Department’s participation in the U.S.-Brazil CEO Forum and both the U.S-Argentina and U.S.-Brazil Commercial Dialogues.

Other assignments across the Commerce Department include serving as Policy Advisor to the Under Secretary for International Trade, Chief Operating Officer of SelectUSA, and a Management Analyst at the National Institute of Standards and Technology. She was awarded the Department of Commerce’s Gold Medal Award for her work in support of the North America Free Trade Agreement negotiations. She has also been twice awarded the ITA’s Bronze Medal Award. Prior to joining the Department of Commerce, Driscoll held various positions in banking and served as a Peace Corps Volunteer in Zaire, Africa.

Driscoll graduated from Saint Anselm College in New Hampshire with a Bachelor of Arts in economics and received a master’s degree in international affairs from Columbia University in New York City.