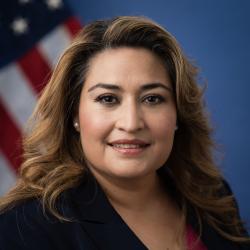 Cynthia Aragón serves as the Executive Director for the Advocacy Center. In this role, she oversees U.S. government advocacy coordination to advance the interest and global competitiveness of U.S. firms seeking to enter new markets and win public contracts in foreign markets around the world. Additionally, Aragón oversees the Multilateral Development Bank Liaison program focused on connecting U.S. companies with opportunities arising from Bank funded projects.

She joined Biden Harris Administration on January 2021 as the White House Liaison for the Department of Commerce. In that role she built and recruited a highly qualified, diverse team of appointees to lead Commerce to foster equitable domestic and international economic growth.

As a former Chief of Staff for the Arizona House of Representatives Democratic Caucus, Cynthia guided and organized the Democratic caucus towards establishment of goals and defined an inclusive legislative agenda. She managed a team of policy advisors, analysts, and administrative specialists to create policy proposals that benefited Arizonans. Aragón uses her leadership skills to foster bipartisan relationships and build coalitions.

Originally from Chihuahua, Mexico, Aragón was raised by a single mother in Phoenix, Arizona, who encouraged her to pursue her dreams and always be a leader, even in spaces where people like her had been historically excluded. As a first-generation graduate, Cynthia earned her bachelor’s degree from Arizona State University and her MBA from the University of Arizona. She is also a graduate of Harvard’s John F. Kennedy School of Government Executive Leadership Program, the National Hispanic Leadership Institute, the Center for Progressive Leadership, and the Flinn-Brown Leadership Academy.