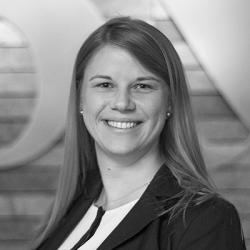 Director of Legislative and Intergovernmental Affairs
Office of the Under Secretary

Caitlin Kovalkoski serves as the Director of Legislative and Intergovernmental Affairs where she leads congressional engagements on behalf of ITA, its mission, and its 2,200 dedicated staff across 100 U.S. cities and 80 international markets. Prior to this role, Caitlin served as a legislative specialist in the Office of the Secretary to advance the department’s legislative agenda, including the historic passage of the CHIPS and Science Act.

Before joining the Department of Commerce, Caitlin served as a congressional aide to U.S. Representative Judy Chu where she managed the congresswoman’s tax and trade efforts as a member of the House Ways and Means Committee, addition to managing financial services, housing and transportation issues. In this capacity, Caitlin focused on a variety of trade issues, including strong intellectual property right protections for the American creative economy in free trade agreements and labor enforcement mechanisms.

Prior to public service, Caitlin spent a decade as a government relations professional for three community development financial institutions where she discovered her talents for developing legislative strategies and building coalitions for collective action. During that time, she advocated to Congress and federal agencies in support of public policies and federal funding to finance affordable housing and other assets for low-income communities, such as childcare and early education centers, community health clinics, and grocery stores.

Caitlin was born and raised in Scranton, Pennsylvania and resides in Washington, D.C. She holds a masters of public policy from George Mason University and a bachelor of science in mathematics from Dickinson College. In her free time, Caitlin enjoys baking, going to brunch and theater with friends, and taking her rescue dog on walks in the National Arboretum.