Learn about barriers to market entry and local requirements, i.e., things to be aware of when entering the market for this country.

Romania overthrew its communist regime more than 30 years ago, yet the Romanian government still plays an oversized role in the economy in terms of employment, ownership of assets, and influence on the business environment. State-owned enterprises shape many industries, acting as dominant customers, suppliers, or, in some cases, competitors. Despite pleas from the international finance and business community, state-owned enterprises in the country do not regularly utilize private management.

While some progress has been made since joining the EU in 2007, companies in Romania still report challenges regarding the independence and efficiency of the judicial system, corruption, bureaucracy, and political instability. Romania’s poor infrastructure continues to negatively impact business costs, productivity, public safety, and the country’s ability to attract foreign investment. The country’s connections to the rest of the EU’s transportation infrastructure are still underdeveloped, which holds back the country’s ability to realize its full potential for new investment, trade, and tourism.

Romania is not a member of the “Euro Zone”, so payments are made in local currency – the New Romanian Lei (RON). However, many companies and consumers have debt denominated in euros, and most big-ticket consumer items (i.e., real estate, cars, and major appliances) are priced in euros. This creates trade inefficiencies due to higher transaction costs and exchange rate fluctuations.

Many U.S. firms operating in Romania face ongoing challenging with recruiting and retaining employees. A fast growing economy, increasing investments and the ability for Romanians to work for higher wages elsewhere in the EU have led to a labor shortage. This shortage is more pronounced in northern and western parts of the country where employers often bus in workers from villages. While unemployment rates are higher in the Moldova region, companies report that skilled workers are harder to find in the lesser-developed eastern portions of the country.

All companies operating in Romania report complaints with frequent legislative changes without prior private sector consultations. Regulatory Impact Assements (RIAs) are very rare and laws can change with little notice.

Uncertainties and risks to the growth outlook are high, but generally remain balanced.

The risks posed by the emergence and spread of COVID-19 virus variants underline the importance of further accelerating the pace of vaccination campaigns. Economic risks relate in particular to the reaction of households and businesses to changes in restrictions.

Inflation may turn out to be higher than expected, if supply constraints are more persistent and price pressures have a stronger impact on consumer prices.

Most respondents to a recent survey (see below) in Romania considered that the country’s biggest problem in 2020 was the health system, followed by the country’s economic situation. Only two percent of Romanians thought that terrorism was a threat

Chart: results of a survey of Romanian population listing top problems in 2020: 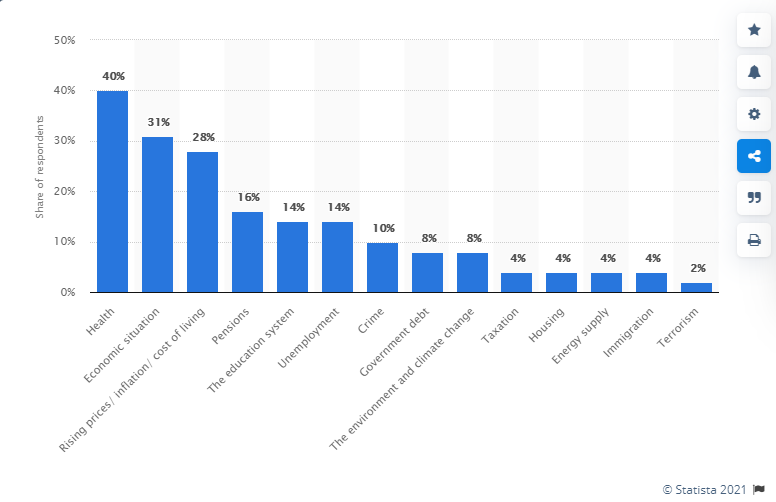