For the United States, commercial aviation is a critical economic jet engine, accounting for 5 percent of U.S. GDP and employing over 10 million American workers. The United States is the largest domestic air passenger and freight market in the world – every day, U.S. airlines transport more than 2.4 million passengers and more than 58,000 tons of cargo. The total value of merchandise exported from or imported to the U.S. by air in 2018 was $1 trillion. Passenger and cargo air traffic in the United States continues to grow – in 2018 both sectors grew by 5 percent and are forecast to maintain steady growth in 2019 and beyond. Aviation drives the largest services sector of the U.S. economy – tourism – and makes possible the just-in-time movement of supply chains, bringing about new investment.

The United States has been committed to growing international aviation markets for more than 25 years through an international aviation policy known as “Open Skies.” Open Skies bilateral and multilateral air services agreements remove government-imposed restrictions on how many airlines can fly between countries, what routes they can serve, what prices they can charge, and what aircraft they must use, while facilitating cooperation between U.S. and foreign airlines and allowing U.S. cargo and express delivery air carriers to move freight and parcels efficiently.  Open Skies encompasses both passenger and cargo aviation, as well as scheduled and charter flights.

To date, the United States has negotiated Open Skies agreements with more than 125 partners on every continent and every level of development. The success of U.S. international aviation policy is clear: In 2018, some 244 million passengers flew between the United States and the rest of the world on U.S. and foreign airlines, an estimated annual increase of 5.3 percent. Passenger traffic to all international regions grew as well, led by a 7.1 percent increase across the Atlantic.

Air transport services contribute substantially to overall U.S. trade in goods and services. Ticket sales by U.S. airlines to foreign travelers count as U.S. services exports, as do ground-handling services at U.S. airports for foreign airlines. Conversely, the transport of U.S. goods on foreign aircraft for export are treated as a services import.

U.S. air passenger traffic topped 1 billion boardings for the first time in 2018 and continued to rise in 2019. Both U.S. and foreign airlines serve the U.S.-to-international market, while only U.S. airlines offer service in the U.S. domestic market. The decade of continued growth that began after the end of the Great Recession in 2009 had been projected to continue in 2020 and beyond.  The first few months of 2020 bore this trend out; a return to 2019 levels is now uncertain and, at best, unlikely before 2023-24 according to industry forecasts. 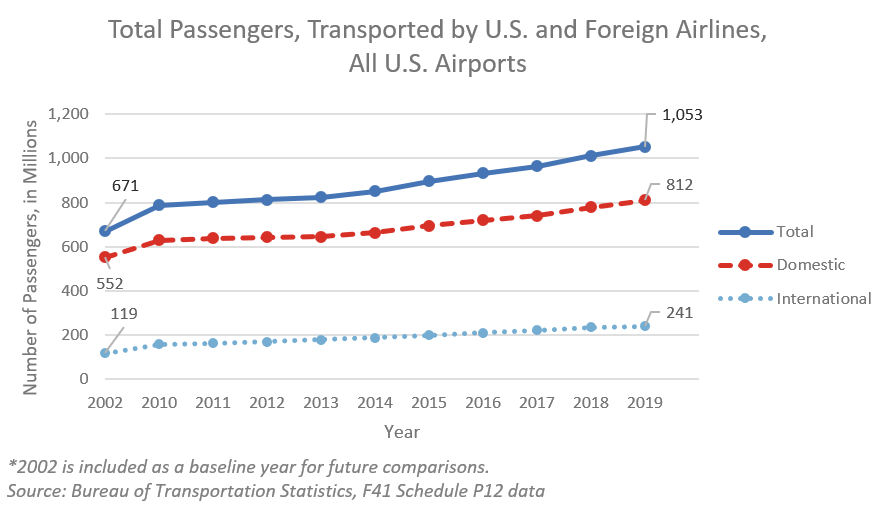 International air cargo demand has been subject to many variables over the past decade, and the tonnage carried tells only part of the story. Because ocean shipping – and for cross-border trade, rail and trucking – costs considerably less than air freight, shippers often prefer these options over air shipment. Demand, as well as cost, serves as a key factor: as the “just-in-time” delivery model for manufacturing becomes less time dependent, air cargo demand is impacted. Air cargo usually is light weight – flowers or eyeglass frames, for example – while heavy cargo such as commodities or machinery is most often shipped by sea, rail, or road. Air cargo hits far above its carried weight; while it accounts for just a few percent by tonnage of overall trade, it represents over 30 percent of trade by value. In 2020, dramatic shifts have taken place, due to the near stoppage of international passenger flights, which in many markets account for half of all available cargo capacity through the use of aircraft belly space. Trade at first dropped significantly, only to see demand surge for healthcare items and a subsequent increase in demand for items ordered through electronic commerce services. It is likely that the air cargo market will be unsettled potentially for years to come. 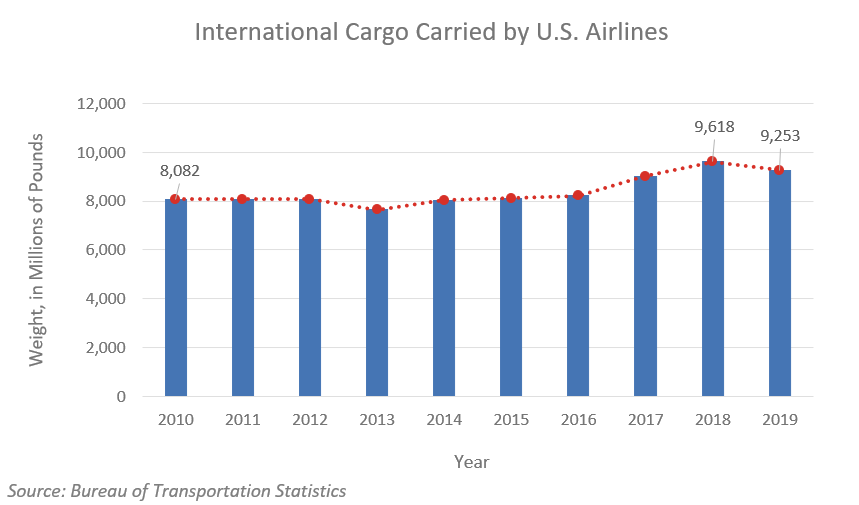