Franchising is still in the process of development in Ukraine which present significant opportunities for investors. It remains a relatively new concept for the Ukrainian business community as it only appeared after the collapse of the Soviet Union in the early 1990s and had no legal framework for the following decade, until the Civil Code and the Commercial Code were adopted in 2003. But even after the Civil Code and the Commercial Code established a necessary platform, for the next decade franchising regulation still lacked several important elements necessary for it to function properly, and Ukrainian law is still rather limited and case law is not yet fully developed. Self-regulated non-governmental associations try to fill the void, particularly given that there has been no special governmental agency to regulate the offer and sale of franchises in Ukraine. 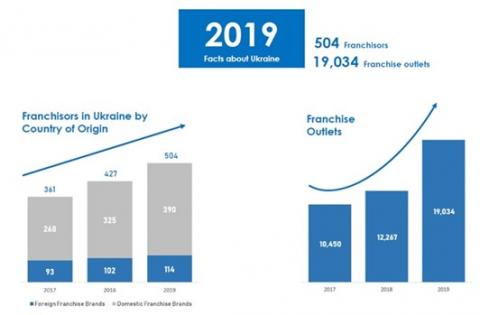 However, despite the gaps and inconsistencies in the Ukrainian legal system, international and local franchise businesses have managed to find enforceable franchising structures or employed alternative arrangements to develop their business in Ukraine. For quite some time now, many U.S. and international brands have successfully operated their franchise businesses, including, among others, Dominos Pizza, KFC, FitCurves, Hyatt, Hilton, Marriott and Radisson, along with a variety of local franchises in food, retail, services and other industries. The market continues to grow. According to statistics, Ukrainian entrepreneurs increasingly prefer franchising when it comes to expanding their business. The franchising market is gaining momentum with the number of franchising outlets growing consistently year-over-year. The Ukrainian Franchise Group states that more than 504 franchisors, and 19,034 franchise outlets are now operating in Ukraine.

Through March 2020, the Ukrainian economy regained its balance and returned to a path of stable growth and recovery. While COVID-19 has had global implications and in Ukraine is likely to lead to a slow-down in growth and GDP in 2020 overall, experts believe that Ukraine’s economic growth will continue in 2021 to be driven by the increasing volume of retail trade, with more than 40 major retail projects currently underway in Kyiv. The State Statistical Service of Ukraine announced that retail trade had grown by 10 percent during the first half of 2019 compared with the corresponding period of 2018, adding that consumer confidence also increased after the presidential elections in early 2019.
Among the European franchise networks represented in Ukraine, most of them belong to Polish, Italian, German and French brands. There are approximately 10 American brands operating in Ukraine, representing a good opportunity for U.S. brands to expand their presence in the market.

Successful franchise networks in Ukraine are:

Today, more than 30 Ukrainian franchises are represented in international markets. Among the most successful are:

The population of Ukraine has undergone a major decline since the 1990s. This is mainly because of the low birth rate, emigration, and the loss of territory due to the Crimea annexation and the conflict with Russia.

Approximately 14% of the population is ages 0-14, 12% is 15-24, 57% is 25-64, and 15% is 65 years and over.
Ukrainian consumers continue to be price sensitive. For example, retail chain ATB has increased its turnover by 37 percent in 2017 compared to 2016, emphasizing low prices instead of online ordering. For the most part, Ukrainians choose to prioritize low price over the convenience of ordering online. However, as soon as there is an increase in disposable income, online orders are expected to increase.

As Ukrainian customer’s interest in organic and healthy food is increasing, local supermarkets are providing more options in these categories. Increasingly, Ukrainian consumers, especially in big cities, are willing to pay more for organic food items. As a result, supermarkets are giving greater priority and shelf spaceto healthy and organic food. Supermarkets are starting to group organic, dietary, gluten-free, lactose-free, diabetic, and farm products into a “healthy eating” group in some stores. Organic products are more widely available through modern retail outlets and the variety of healthy products is expanding. There are a few specialty health stores such as Eco-lavka and GoodWine.

Fruits and vegetables remain a staple in the Ukrainian diet. Even with growth in other retail sectors, supermarkets are still dedicating a large portion of their sales area to fruits and vegetables. Most are grown locally, with exotic fruits imported during the winter holiday season.

Collaboration in the franchising sector in Ukraine is offered by over 500 franchisors, so choosing the right franchise niche is essential for successful market entry. Below is a brief overview of the 50 most popular franchises in Ukraine in the sectors with the highest demand.

Franchising in Ukraine is more developed in larger city business centers, such as Kyiv, Kharkiv, Odesa, Lviv, and Dnipro.

The most prevalent supply chain model in Ukraine is one in which the franchisor designates suppliers for core products but allows the franchisee to source the remaining products in Ukraine. Core products usually include advanced and proprietary equipment/software, as well as key food ingredients in the food-related franchise segment. Franchisees can source basic equipment and non-core components or ingredients locally due to the lower costs and faster times to market. U.S. franchisors should be aware that due to inefficiency in Ukrainian customs, it is likely that customs clearance of imported equipment and products can be delayed.

Advertising Methods
Industry experts and local franchisors consider online channels to be the most widely used and efficient channels for advertising their brands, products, and services. In particular, local franchise operators use social networks like Facebook and Google to advertise in this category. Other effective channels include industry journals and TV business channels, and established franchisors appear guest speakers on various business television programs. Finally, events like trade shows conferences, promotional seminars, and training are other effective platforms to promote franchise brands and business models in Ukraine.

Assessment of Market Profile
The development of franchising in Ukraine is hindered by the absence of clear regulations and laws, as well as a lack of access to financing and the ability of local banks to provide financing options to those seeking franchise opportunities. . The term “franchising” is not used in Ukrainian legislation, instead it is identified as a concept of commercial concession. According to the contract of commercial concession, one party (brand owner) transfers to the other party the right to use the business model for commercial purposes for a fee.

The following factors have a negative impact on franchising:

Franchising attracts investment in the country and introduces advanced technologies and innovative methods of doing business.

But despite certain problems in the field of franchising, the market continues to grow rapidly. In the next few years the situation should change as the legal foundation for franchising is strengthened and consumers increasingly demand international brands.

Many international franchises currently present at the Ukrainian market have been adopted from abroad, mostly in the field of trade and services, and with significant portion from Russia.

The majority of them – about 60% – opens a representative office. For example, Delta Sport represents the well-known brands in Ukraine - Nike and Mexx; MTR-group is the distributor of Broadway, Motor Jeans, Tom Tailor, Kenvelo. Others prefer to collaborate with one partner promoting the franchise brand on the territory of the whole country – Helen Doron Early English, FasTracKids and so on.

Most Ukrainian franchises are concentrated in the capital and only small percentage of franchises are located in large regional centers. In addition, most franchise units are formed in the biggest Ukrainian cities, such as Kharkiv, Dnipro, Odesa, and Lviv. But many towns are not yet acquainted with franchising, and present significant opportunities for growth.