China’s market for hospitals and senior center construction is large and growing, but government limits on procurement pose a challenge for U.S. firms.

According to growth targets in China’s national development plans and the “Healthy China” initiative, medical infrastructure is expected to have expanded from 2015 to 2020, with a 30% increase in public hospital beds and a 100% increase in private hospital beds.

According to China’s National Health Commission, by the end of 2019, China had 4,975,633 public hospital beds and 1,890,913 private hospital beds, representing increases of 16% and 83%, respectively, since 2015. In that same period, 7,906 of China’s new medical institutions were private hospitals, which now account for 65% of hospitals nationwide.

Affluent urban and rural residents and an aging population create demand for the construction of healthcare facilities and senior care centers.

According to an industry expert, the market size of hospital construction in China will be over $75 billion from 2020-2025, including $30 billion in infrastructure, $30 billion in digitalization (such as IoT and big data) and over $15 billion in medical equipment.

COVID-19 has exposed the issue of insufficient public health services in China. Many provinces have started plans to renovate, expand or build hospitals. Some of these projects can be found on this Chinese language industry website.

Many American hospitals come to China seeking partnerships that deliver patients to their U.S. facilities, or real estate developers that build hospitals with the American brand. The map below shows some of these existing hospital projects.

Chinese hospitals have also sought to expand their capabilities through partnerships with U.S. healthcare providers. Those partnerships extend across many provinces and cities in China, including:

The map below shows the locations, as of June 2020, of those hospitals with U.S. partnerships in China. 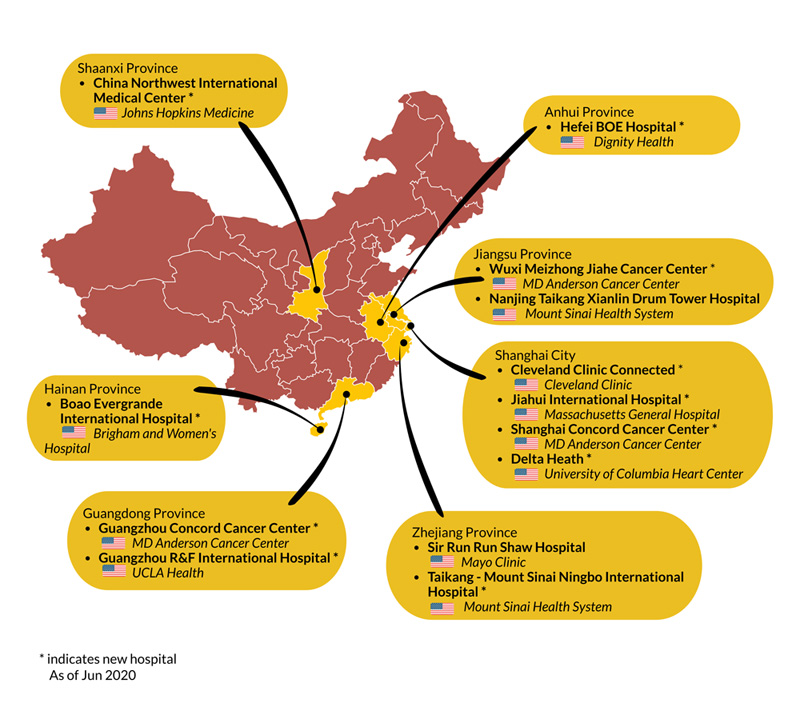