The Architecture, Engineering, and Construction (AEC) services sector provides a host of services surrounding the planning and building of commercial and residential projects that employ design and construction professionals in the planning and implementation of often multi-billion-dollar projects. With a reputation for high-quality work, the U.S. AEC sector continues to be competitive in overseas markets.

There are several AEC sub-sectors that focus on specific types of design and construction projects, including: transportation/infrastructure, health care (i.e. hospitals and medical facilities), industrial, and entertainment (i.e. convention centers, amusement parks). Many AEC firms specialize in one or more of these project areas.

Drivers of Demand for Architecture, Engineering, and Construction Services

Similar to other professional services sectors, the barriers facing AEC service providers in foreign markets are typically regulatory in nature. In many instances, foreign countries have professional licensing/certification requirements for AEC professionals working on projects in the foreign market, which may require at least one professional (e.g. architect, professional engineer, or construction professional) to be certified in that country. In order to address this requirement, U.S. firms choose to hire/contract with a local professional, but if this is not an option, other arrangements might be made on a case-by-case basis. Reciprocity at the national level is often difficult if not impossible, particularly as U.S. architecture and engineering certification organizations operate at the state level. Other market access barriers include nationality requirements for certified AEC professionals and restrictions on movement of professional personnel under a country’s immigration laws, as well as barriers that are common to many firms operating in a foreign market, including prohibitions on commercial structure and locality requirements, banking issues, and repatriation of profits and tax treatment. 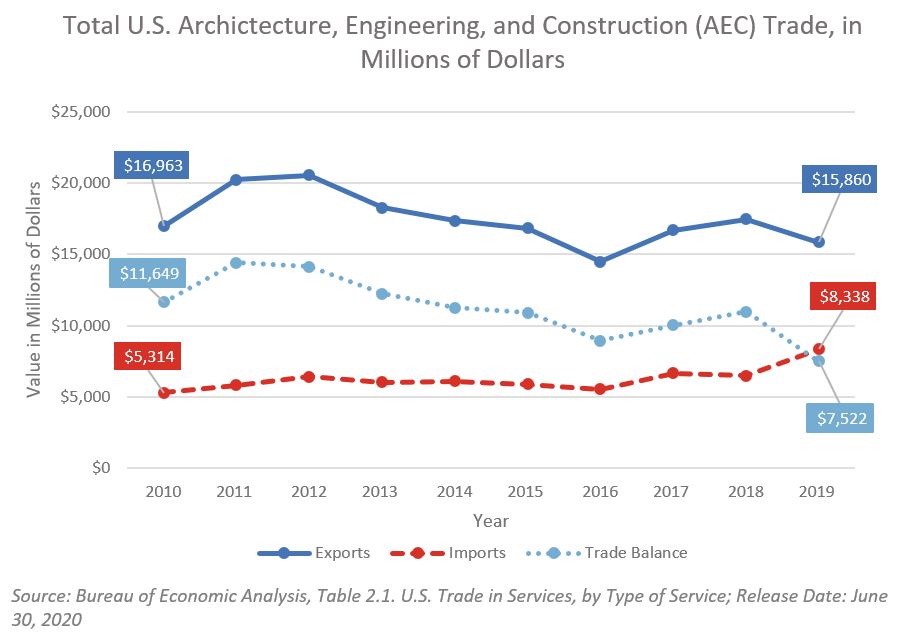 Depending on the sub-sector, the leading export markets for AEC services vary between regions.  For example, in the architecture and engineering services sub-sectors, the largest regional markets are the Asia-Pacific region and Europe, while Africa and Latin America are the two largest markets for construction services.

Over the last decade, the United States has enjoyed a trade surplus of between $100 to $200 million in architectural services, with over $1 billion in exports in 2019. 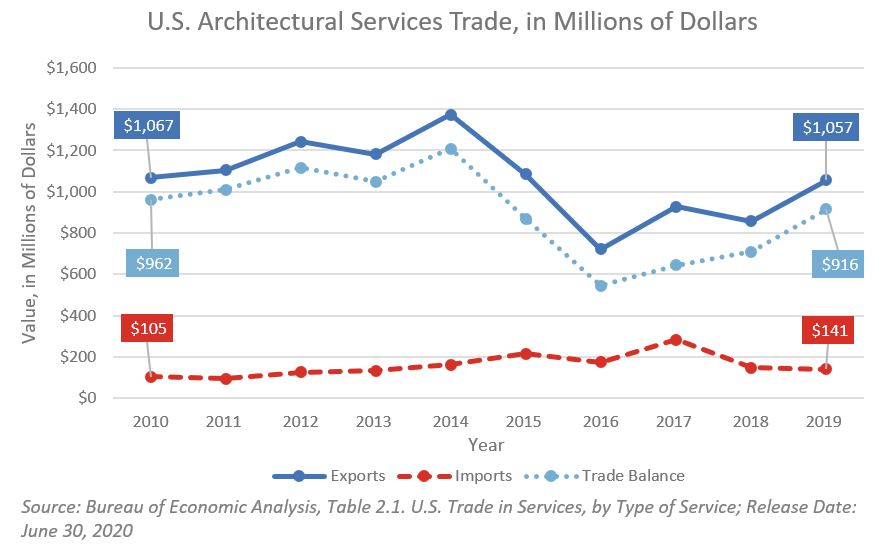 In 2019 almost 60 percent of U.S. architectural services were provided in the Asia-Pacific region, with more than $625 million in exports. Europe was the next largest export market, accounting for 16 percent of U.S. exports, valued at more than $170 million. 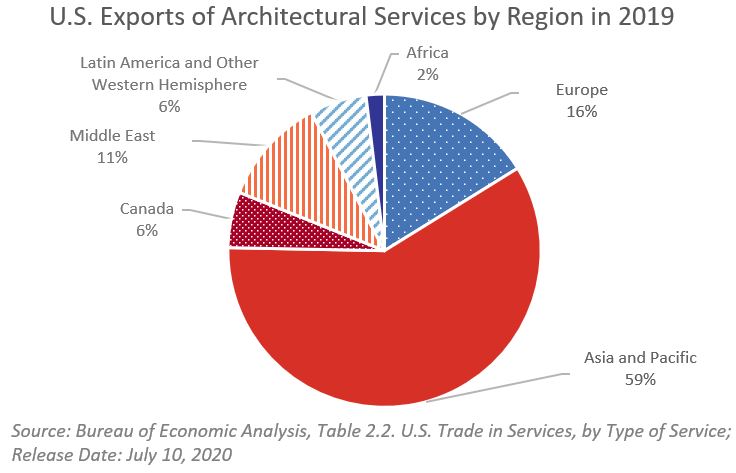 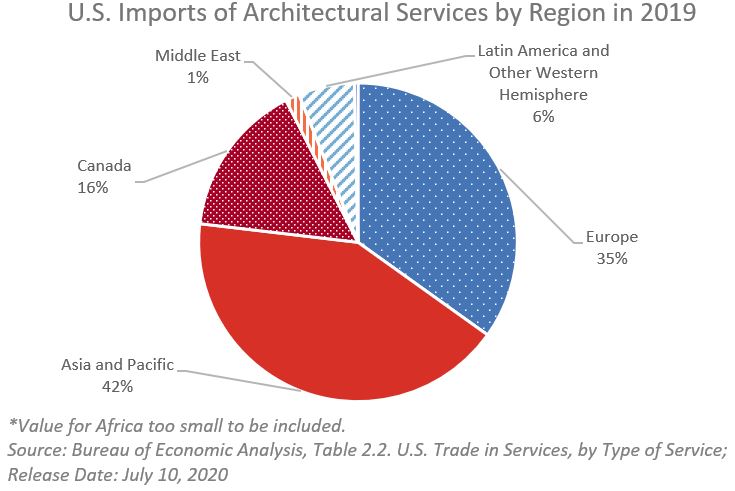 Engineering services is the largest component of AEC export trade, representing more than 70 percent of all AEC exports.  Exports reached over $11.6 billion in 2019, resulting in a U.S. trade surplus of more than $4 billion. 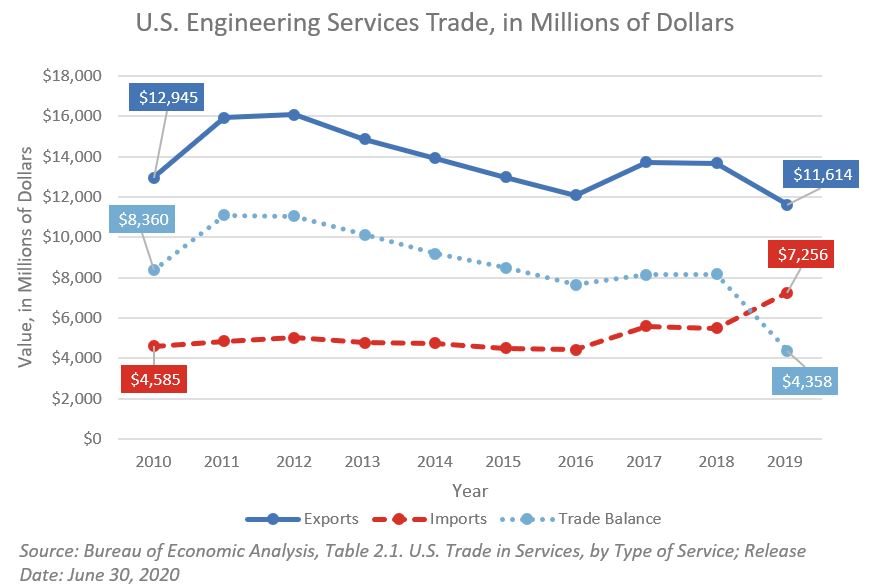 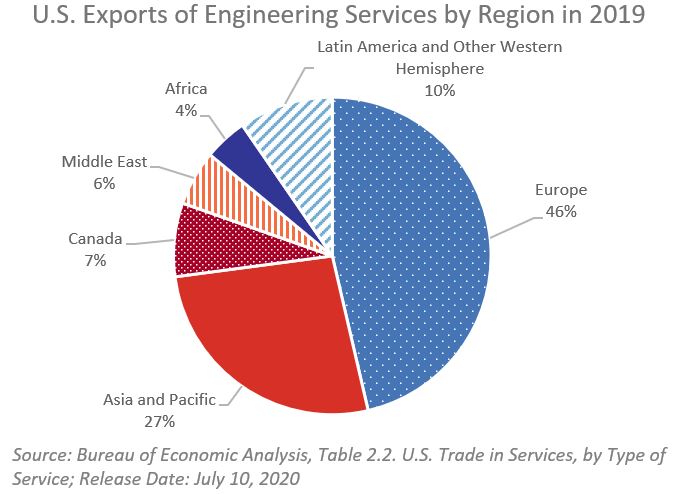 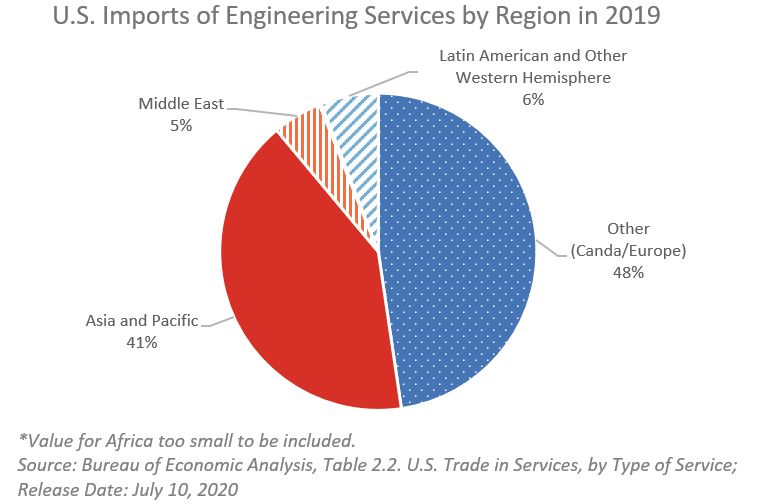 The U.S. construction services sector, which includes services such as construction management, planning, and safety-related services, has seen a continued increase in exports over the last four years, to one of the sector’s highest export levels, valued at almost $3.2 billion in 2019. Over the last ten years, imports have remained steady at around $1 billion over the last decade. 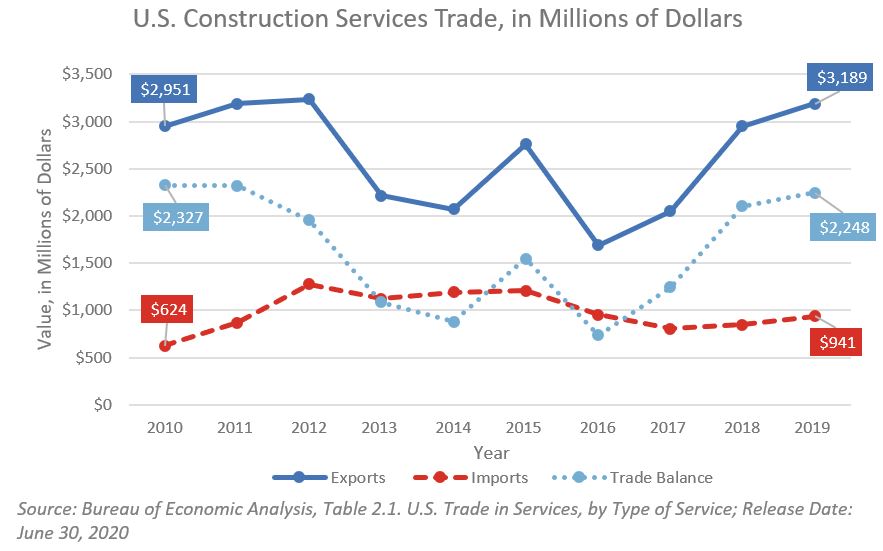 On a regional basis, U.S. exports were primarily to Africa and the Latin American regions, representing almost half of total exports and valued almost $1.5 billion in 2019. European markets were the destination of more than $1 billion in exports. In contrast, imports of construction services were primarily from Canada, followed by Europe and the Asia-Pacific region. 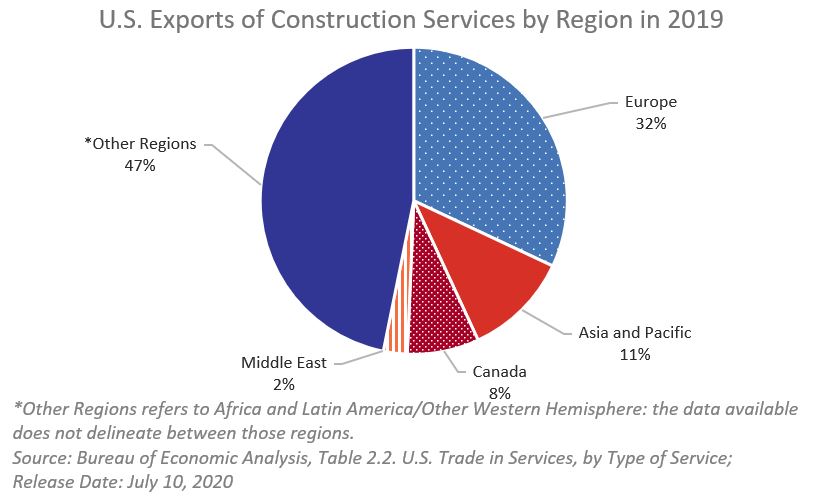 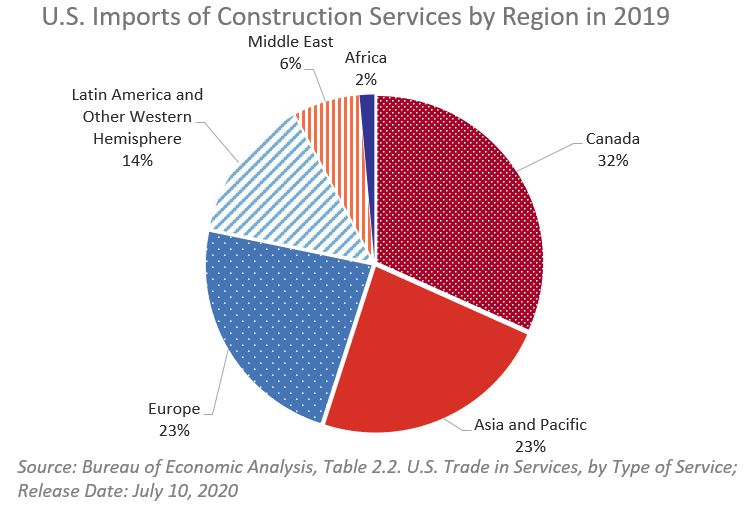