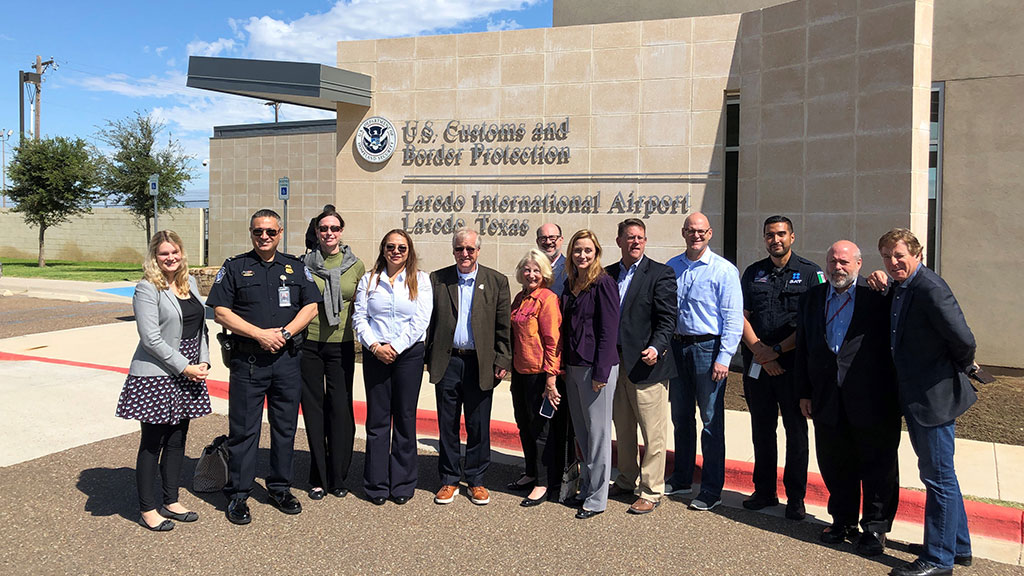 Last month, from October 16-17, industry leaders and officials from the U.S. Department of Commerce’s International Trade Administration (ITA) traveled to Laredo, Texas, one of the premier cities for U.S.-Mexico trade.

With over $100 billion in U.S. exports processed in 2018 alone, customs officials on both sides of the border face increasing demands to perform efficient and effective inspections. The Laredo International Airport has seized upon this growing commercial opportunity by innovating their customs process and establishing a unique bi-national inspection facility in 2013. ITA’s Advisory Committee on Supply Chain Competitiveness (ACSCC) had the privilege of touring and learning more about this facility and its achievements over the past several years.

The Federal Inspection Station at the Laredo airport, the first of its kind, houses both U.S. Customs and Border Patrol (CBP) and Mexican customs officials (Servicio de Administración Tributaria, or SAT), who jointly perform inspection checks on U.S. exports within a single facility. With goods examined by both agencies in one location, U.S. exports can have expedited entry into airports in eight Mexican cities, allowing for uninterrupted delivery within Mexico. Cargo cleared at this facility can be immediately released to the importer in Mexico with no pauses at customs in these Mexican airports.

Elizabeth Merritt, Managing Director for Cargo Services at Airlines for America and ACSCC member, highlighted the importance of streamlined customs procedures to U.S. industries and value chains saying, “by leveraging a bilateral customs partnership, the Laredo airport boosts the competitiveness of the North American supply chain while maximizing the limited resources of all stakeholders to ensure trade compliance.”

The joint inspection process helps American companies avoid production delays by reducing the amount of time it takes to receive necessary parts and is especially critical for just-in-time deliveries. “Our largest trading partner in the United States is Mexico, so the ability to quickly clear expedited exports heading to that country is essential,” said Brandon Fried, Executive Director of The Airforwarders Association and member of the ACSCC.

Establishing this customs facility was no easy feat. Its creation required both a passage of a law in Mexico’s Congress of the Union and an amendment to the Mexican Constitution, but it was well worth the effort. Today, the Laredo International Airport features the only bi-national federal inspection station in the United States and is the only airport that has approval by the Mexican government to pre-inspect air cargo bound for delivery in Mexico.

Currently, this accelerated customs treatment is available for products in the automotive, aerospace, and electronics industries. Importers, shippers, and other logistics companies can also benefit from round-the-clock service from the customs officials, as Laredo has the only airport on the southern border with U.S. customs open 24 hours a day, seven days a week.

During their visit to the facility, members of the ACSCC, all experts in the policies and logistics surrounding U.S. supply chains, received a presentation on the Federal Inspection Station’s activities and spoke with both U.S. and Mexican customs officials to better understand their joint procedures.

“Witnessing the high level of cooperation and information sharing between the U.S. and Mexican customs authorities at the Laredo Airport Federal Inspection Station was an eye-opening experience, showing how such international joint efforts can streamline the border clearance process,” said Michal Mullen, Executive Director of the Express Association of America and ACSCC member. “The trade community has long desired to have this kind of international ‘single window’ operating on the border, and we hope the process will be expanded to more air and land crossing points in the near future.”

Mr. Fried also expressed hopes for the future activities of this bi-national facility saying, “my organization is pleased to see Mexican customs officials working alongside their CBP counterparts at Laredo International Airport. Their joint presence under the same roof enables easy preclearance on air export shipments destined for several manufacturing centers throughout Mexico. We look forward to the program’s continued success and hope to see similar arrangements at other U.S. airports in the future.”

Looking forward, the officials based at the Federal Inspection Station see room for growth, especially as approval of the U.S.-Mexico-Canada Agreement (USMCA) could lead to a surge in trade between the neighboring countries. CBP and SAT officials expressed their desire to grow awareness of their collaborative program and to expand the list of qualified products for inspection. Experts from the Laredo airport have already been invited to pilot similar programs at other airports in the United States, and customs agents believe the joint facility is prepared to handle greater volumes of U.S. exports in the future. This innovative, bi-national process can serve as a model to other ports and cities seeking to expedite inspections for the benefit of U.S. industry.