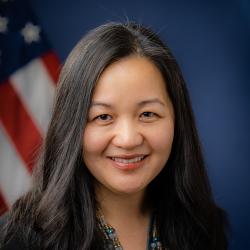 As the Deputy Assistant Secretary for Asia, Pamela Phan is responsible for developing programs, policies, and strategies designed to strengthen the United States’ commercial position in Asia. She oversees over 200 employees across 16 markets in Asia and in Washington, D.C. who promote U.S. exports, especially among small and medium-sized enterprises; advance and protect U.S. commercial interests overseas; and attract inward investment into the United States. In addition, she directs Department of Commerce efforts to formulate trade policy and resolve market access issues facing U.S. exporters seeking to sustain and expand their businesses in Asia.

Ms. Phan is a career civil servant who spent nearly a decade at the Department of State before joining the Department of Commerce. Immediately prior to her current assignment, she served as the Acting Special Representative for Commercial and Business Affairs at State, where she led agency efforts to promote entrepreneurship, innovation, and responsible business conduct and to advocate for U.S. businesses abroad. From 2018-2020, she served as State’s Liaison to the Overseas Private Investment Corporation (OPIC) during OPIC’s historic transformation into the U.S. International Development Finance Corporation. As State’s Senior Investment Treaty Negotiator, she also played a leading role in numerous U.S. investment treaty and free trade agreement negotiations spanning three separate Administrations.

Ms. Phan is a specialist in international investment and Chinese law who has held teaching positions at Stanford Law School and the George Washington University School of Law and as a visiting scholar at law schools in China. Before joining the Department of State, she ran the Master of Laws Program in International Economic Law, Business and Policy at Stanford. Her prior government experience includes two years on Capitol Hill focusing on human rights and rule of law developments in China.  Earlier in her career, she spent nearly six years as a corporate transactions lawyer in New York, Hong Kong, Beijing, and Singapore.

Ms. Phan holds a juris doctorate from Columbia University School of Law and a Bachelor of Arts. from Stanford University.  She is licensed to practice law in New York and California.  A native speaker of English and Vietnamese, she is also fluent in Mandarin Chinese.