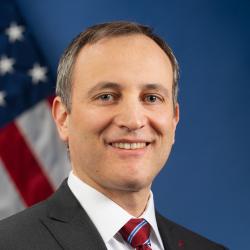 As the Deputy Assistant Secretary for Europe and Eurasia, David De Falco directs the U.S. Department of Commerce’s efforts to formulate trade policy and resolve market access issues facing U.S. exporters seeking to sustain and expand their businesses in Europe. He oversees a network of 32 U.S. Commercial Service field offices at U.S. embassies and consulates across the region, and a staff of approximately 250 employees. His responsibilities include developing and recommending policies, strategies, and programs to advance U.S. economic and commercial interests throughout Europe and Eurasia, and with the European Union.

De Falco is a career civil servant with 20 years of service in the Department of Commerce. Before his current assignment, he was Acting Executive Director for Europe and Eurasia, where he was responsible for managing the Department’s assets in the region and assisting the Deputy Assistant Secretary for Europe and Eurasia to develop and implement trade policy and trade promotion activities. Prior positions include Director for the Office of the European Union, where he developed and executed strategies to increase and maintain market access for U.S. companies in Europe and where he served as the Department lead for the Transatlantic Trade and Investment Partnership negotiations. Early in his career, he held several positions in the Office of the European Union and Regional Affairs where he advised senior Department officials on trade policy and commercial issues with the European Union and its Member States. A member of the Virginia State Bar and the District of Columbia Bar, DeFalco previously served as an editor on the Journal of International Legal Studies.

De Falco received a law degree with a specialization in international business transactions from the George Mason University School of Law. He graduated with honors from Washington and Lee University with a bachelor’s degree in economics and finance. He is a native Italian speaker and proficient in French and Spanish.

David and his wife, Cheryl, are volunteer puppy raisers for Guiding Eyes for the Blind.