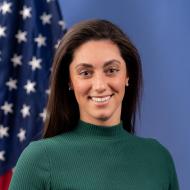 Acting Director of Public Affairs
Office of the Under Secretary

Vanessa Ambrosini is the Acting Director of Public Affairs for the International Trade Administration (ITA). In this capacity, she crafts the messaging of ITA, plans and executes communication strategies, and functions as the primary media contact. Previously, she served as Spokesperson and Speechwriter in the Office of the Under Secretary.

In 2018, Ms. Ambrosini worked as the Director of Regional Communications at the White House.  In that role, she led the efforts to promote the president’s economic and trade agenda while also amplifying various administration initiatives in local and regional media markets throughout the country.

At the very beginning of the Trump Administration in 2017, she served as Advisor to the White House Press Secretary. Working directly alongside the Press Secretary, she managed day-to-day press operations, coordinated messaging, and fulfilled a pivotal role within the White Press Office.

Ms. Ambrosini originally hails from Wisconsin, where she began her career in press and communications within the Wisconsin State Legislature in Madison. She holds a B.A. in Broadcast & Electronic Communications with a minor in Political Science from Marquette University in Milwaukee.