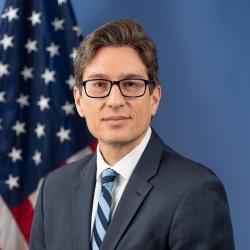 Deputy Assistant Secretary for Travel and Tourism
Industry and Analysis

Phil Lovas began serving as U.S. Department of Commerce Deputy Assistant Secretary for Travel and Tourism in August 2018. Prior to joining, Commerce, he served as Regional Advocate for the U.S. Small Business Administration's Office of Advocacy covering Arizona, California, Hawaii and Nevada. While there, he worked with small business owners and proponents advocating against overly burdensome federal rules and regulations.

In the private sector, for nearly 15 years he worked in the hotel industry as a franchise developer establishing franchises throughout the western United States for Cendant, InterContinental Hotels Group and Red Lion Hotels.

Phil also served five years as a state representative in the Arizona legislature beginning in February 2012. During his time in the legislature, he chaired the Rules, Ethics and Insurance committees. Phil and his wife Corinne have three children and they live in Peoria, Arizona.