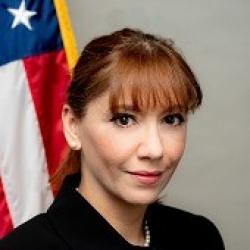 Assistant Secretary of Commerce for Industry and Analysis
Industry & Analysis

Nazak Nikakhtar was nominated by President Donald J. Trump to become the Assistant Secretary for Industry and Analysis and was confirmed by the U.S. Senate on March 19, 2018.

Nazak Nikakhtar was nominated by President Donald J. Trump to become the Assistant Secretary for Industry and Analysis and was confirmed by the U.S. Senate on March 19, 2018.

Ms. Nikakhtar serves as the Department's primary liaison with U.S. industry and trade associations to help address industry concerns and support American competitiveness. As the Department's lead on the Committee on Foreign Investment in the United States (CFIUS), she plays a key role in shaping U.S. investment policy and addressing national security threats. She also advises the Secretary on trade and economic issues impacting the global competitiveness of U.S. businesses, heading the division that conducts trade policy research and analysis on manufacturing, services, e-commerce, privacy and cybersecurity, emerging technologies, and economic trends that impact the International Trade Administration's mission.

During her previous tenure at the International Trade Administration, Ms. Nikakhtar worked at ITA's China/Non-Market Economy Office. In that position, Ms. Nikakhtar led numerous complex antidumping cases, advised on legal and regulatory matters related to the enforcement of U.S. trade laws, and participated in bilateral negotiations on trade issues between the United States and China. She received several award medals from the Department for her work on cutting-edge trade policy issues. Ms. Nikakhtar also served at the U.S. Department of Commerce's Bureau of Industry and Security as an industry analyst, where she performed statistical analyses for the U.S. government's defense industrial base surveys.

Ms. Nikakhtar received her Bachelor of Arts degree from the University of California, Los Angeles, and her Juris Doctor and Master of Economics degrees from Syracuse University. She served as the Editor-in-Chief of the Syracuse Journal of International Law and Commerce, and as a judicial extern for the Honorable Ronald S.W. Lew in the U.S. District Court for the Southern District of California.