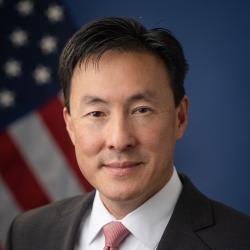 Mark L. Keam is Deputy Assistant Secretary for Travel and Tourism in the International Trade Administration where he leads our government’s strategy to maintain America’s status as a top destination for international visitors.

As head of the National Travel and Tourism Office, Mark and his team promote the competitiveness of America’s industries, which in turn supports robust employment and economic growth for states and localities. The office produces research and works with Brand USA, Tourism Policy Council, Travel and Tourism Advisory Board, and other private and public sector stakeholders to advance global travel and tourism.

Before joining the Biden Administration, Mark was a seven-term elected member of the Virginia House of Delegates where he led the Virginia Legislative Tourism Caucus and helped pass dozens of bills that promote economic development and innovative job creation. He served as vice chair of the Finance Committee, chair of the Higher Education Subcommittee, chair of the Asian American and Pacific Islander Caucus, and member of the Courts and the Commerce and Energy Committees.

In addition to his experiences as a state legislator, Mark has served in federal and local governments, including as chief counsel to a United States Senate Assistant Leader. Mark also has professional experiences in the private sector, co-founding two international trading businesses, working as in-house counsel with a Fortune 15 technology company, and leading a national ethnic chamber of commerce.

As a naturalized immigrant, Mark has lived a global and multicultural life. He grew up and attended schools in five countries and traveled to over two dozen other nations. Mark, his wife, and two children have visited every American state and some of its territories. He graduated from the University of California system with degrees in political science and law.