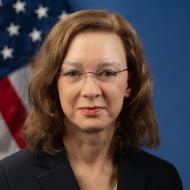 From 2016 to 2019 Mrs. Farris was the Director of the Office of Digital Initiatives of the Global Markets, part of the International Trade Administration.  She led a team focused on digital client engagement, and digital business solutions part of GM’s global network.

From 2013 to 2016, she was the Executive Director for Asia where she managed U.S. Commercial Service operations located in U.S. embassies in fourteen Asian countries, as well as managing a staff of trade experts in Washington, under the Deputy Assistant Secretary (DAS) for Asia, frequently serving as the acting DAS for Asia.

In 1999 Mrs. Farris became the first-ever U.S. Consul to Toulouse, France, opening the U.S. Consulate there, simultaneously serving as PCO.  Prior to Toulouse, Mrs. Farris was the Commercial Attaché at the U.S. Embassy in Paris.  She joined the Embassy in Paris in 1998 after serving as a Senior Trade Specialist at the U.S. Export Assistance Center in Chicago, Illinois, having joined the Foreign Service in 1996. From 1990 to 1996 Mrs. Farris served in a variety of positions in Commercial Service headquarters in Washington, DC, including as Special Assistant to the then Deputy Assistant Secretary for International Operations.

Mrs. Farris holds a B.A. with honors from the University of California at Berkeley, which included a year at the Institut des Etudes Politiques, Université de Grenoble, France.  She also holds a Master of Arts in Law and Diplomacy from the Fletcher School, Tufts University.  She is fluent in French.  Mrs. Farris is married with two sons, ages 15 and 18.