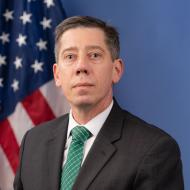 Prior to his return to government service in 2016, Mr. Laroski served as Counsel in the International Trade Practice Group in King & Spalding’s Washington, DC office.   There, his practice drew upon his extensive experience in trade negotiation and international dispute settlement to assist clients in the removal of market access barriers and other impediments to exporting goods and services around the world.  He also provided trade policy advice on a wide variety of matters, including U.S. legislation, trade remedies, and the negotiation of international agreements.

From 2008 to 2012, Mr. Laroski served as Associate General Counsel in the Office of the U.S. Trade Representative, Executive Office of the President (USTR), where he was responsible for legal matters involving Customs, Labor, and Technical Barriers to Trade.  He served as lead counsel for the United States in numerous dispute settlement proceedings before the World Trade Organization (WTO), including the successful US challenges to the Chinese application of antidumping and countervailing duty measures on US grain-oriented electrical steel products and Chinese subsidies for indigenous Chinese-branded products.  Mr. Laroski also served as the U.S. lawyer in the negotiation of the Sanitary and Phytosanitary Measures, Technical Barriers to Trade, Labor, and Regulatory Coherence chapters to the Trans-Pacific Partnership free trade agreement negotiations.  He also coordinated the U.S. government response to anti-subsidy proceedings in Australia, China, Peru, and the European Union.

Prior to joining USTR, Mr. Laroski spent 10 years in private practice counseling foreign government officials, domestic and foreign corporations, and industry associations on the full range of U.S. laws and international rules governing cross-border trade, with a particular focus on handling antidumping and countervailing duty litigation before the U.S. Department of Commerce, U.S. International Trade Commission, U.S. Court of International Trade, U.S. Court of Appeals for the Federal Circuit, and the WTO.

From 1998 to 1999, he served as law clerk to Senior Judge Dominick L. DiCarlo on the U.S. Court of International Trade.

Mr. Laroski earned his law degree from Fordham University School of Law in 1997. He later earned his LL.M degree (with distinction) in International and Comparative Law from Georgetown University Law Center in 1998 and previously received his undergraduate diploma from Georgetown's Edmund A. Walsh School of Foreign Service in 1994.