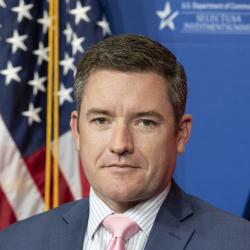 Previously, Mr. Lenihan served as the Executive Director of SelectUSA, where he oversaw the government-wide business investment promotion agency housed within the U.S. Department of Commerce. SelectUSA’s mission is to support the creation of high-impact jobs, spur economic growth in communities, and promote American competitiveness among global markets. Since inception, SelectUSA has facilitated more than $64 billion in business investment, creating and/or retaining over 86,000 U.S. jobs. Brian co-chaired with the Director of the White House National Economic Council, the Interagency Investment Working Group which coordinates existing resources across the federal government to promote business investment and address federal barriers.

Mr. Lenihan previously was a Senior Advisor in the office of the Secretary of Commerce. In this capacity, he served as a primary liaison to the Executive Offices of the President, and he proactively coordinated with the Deputy Secretary and Under Secretaries to oversee the development, implementation, and communication of the Secretary’s policy initiatives. Mr. Lenihan also served as the Acting Assistant Secretary for Legislative and Intergovernmental Affairs for the Department in 2017. Mr. Lenihan was the Department’s principal liaison with the U.S. Congress, Governors and state officials. Mr. Lenihan coordinated the Department’s legislative activity, and advised the Secretary, Deputy Secretary, and other senior leadership on legislative matters. Mr. Lenihan also led the Senate confirmation process for those senior leaders nominated by the President.

Prior to joining the Department of Commerce, Mr. Lenihan facilitated development and advocated on behalf of the non-residential construction industry’s federal policy positions. Mr. Lenihan has also served as an aide for three members of the U.S Congress. In previous positions, he represented several entities including top publicly-traded companies, private enterprises, municipalities, defense contractors, economic development authorities, small businesses, and non-profit organizations. He has been a frequent speaker and panelist for meetings and briefings in Washington, D.C. and around the globe.