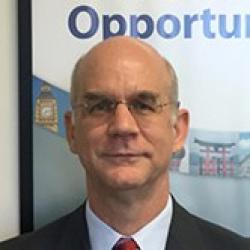 Alan Turley is the Deputy Assistant Secretary of Commerce for China and Mongolia in the U.S. Department of Commerce’s International Trade Administration. He leads a team of more than 160 professionals in the U.S. and overseas that is dedicated to opening foreign markets to American products, protecting American Commercial interests abroad, promoting U.S. exports and encouraging foreign direct investment into the United States. He advises the leadership in the Department of Commerce on trade-policy issues regarding the bilateral commercial relationship between the United States and China and helps shape the Department’s trade promotion agenda.

Prior to re-joining the Commercial Service, Mr. Turley was Vice President for International Affairs in Asia Pacific for FedEx Express. Twice a winner of FedEx’s coveted “Five Star Award”, Mr. Turley helped manage FedEx’s rapid growth and expansion in Asia, including the building of China’s first international air express hub, the founding of FedEx’s wholly-owned operations in China, and the approval of FedEx’s purchase of TNT Express.

Mr. Turley’s previous service in the U.S. & Foreign Commercial Service started in 1986 in Japan, where he head headed the Major Projects and Transportation Equipment Unit.  Mr. Turley then served as the Director of the Commercial Service's International Marketing Center at the U.S. Embassy in London before moving back to Asia to become Deputy Senior Commercial Officer at the American Institute in Taiwan.

Alan Turley was educated in public schools in Cheshire Connecticut and was graduated from the University of Virginia with High Honors in 1983.  After receiving his B.A., Mr. Turley spent two years studying Chinese in Taiwan at National Taiwan Normal University's Mandarin Training Center.  During that time he also traveled extensively throughout Asia.